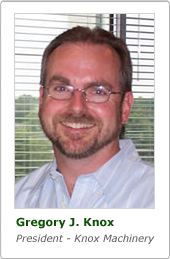 Knox: The company and the man.

Knox Machinery was founded in 1996, when the company’s namesake and president, Greg Knox, and his wife Margie, decided that southwestern Ohio was where they wanted to raise their young family. Having grown up in New York and spending many years in Michigan, they were attracted to the strong family values and grassroots integrity so prevalent in Mid West communities.

Greg’s background is diverse, having attended New York City’s School of Visual Arts before embarking on a career as a programmer for Union Carbide in 1981. He later moved to Detroit to join first the service department, and eventually the sales force of a machine tool dealership, where he became a top national salesman for many of the very brands Knox Machinery now offers. That experience in both sales and service excellence is what drives the company and the man today.

Embracing the influences of the region, Knox Machinery’s business model and philosophy are steeped in honesty and hard work. Every customer is treated like family, and each is surrounded by a 360˚ approach to customer service. “Family is not a one-time thing,” says Mr. Knox. “It’s for keeps and we want our customers to know that we take every relationship seriously.”

The company has assembled a staff of best-in-class professionals, each have a special skill in helping manufacturers to develop the most efficient and profitable machining solutions with the lowest cost of ownership possible.

Greg believes strongly in the Knox core mission: “We have built our company to serve our customers, from the type of people we hire, to the products we choose and the processes we employ. It all starts with the customer’s defined needs. Our whole approach is built around that principle, and we don’t rest until we deliver it.”

All of us at Knox Machinery want to thank our customers for making us their first choice for CNC equipment.