In a surprise move, President Barack Hussein Obama has announced the appointment of his newest in a long string of “CZARS”. 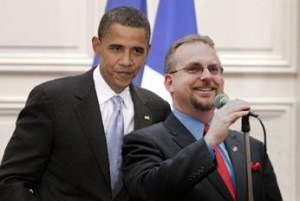 Greg Knox of Knox Machinery has been appointed to the new post of CNC CZAR for the nation.

“I am really excited about this,” said Knox “and it has nothing to do with those campaign donations to Mr. Obama — really.”

Asked to comment on the bold action taken in just his first week in (unelected) office, Mr. Knox commented, “Shutting down all of the other competitive dealerships in Ohio had nothing to do with the fact that I own Knox Machinery. It is in the best interest of the country. I did it for the people. Let’s face it, all that competition just convolutes the buying process, adding unnecessary time and expense to what really should be a simple process. And the fact that I no longer have any competition shouldn’t change my business model all that much. I mean, we had already planned this price increase, and doing away with after-hours service was planned long before Mr. Obama gave me the nod. Believe me, this will be a good thing for everyone. Trust me!”

Mr. Obama stated, “This has nothing to do with the contributions. It is about knowing what is good for these people better than the so called ‘experts in their industry.’”

Asked if he found the capricious “pink slips” given to Knox’s competitors suspicious, he authoritatively stated, “I am not sure what capricious means – my teleprompter is on the fritz again. All I know is, competition worked for a while — 200 years or something like that — but it’s time we take some progressive action to bring some real hope to this economy.” Mr. Obama stated.

Commenting on the position that “hope” by itself is not really a strategy, Knox replied, “President Obama and I both believe that ‘hope’ is what needs to change in order for there to be a strategy.”

Seeing the puzzled looks on the Reporters’ faces, Knox added, “With this goal, we can envision a brighter future and a better America.”

“You will just have to buy the machines, to know what is in the contract.” Madame Speaker chimed in.