Knox Machinery, Inc. owner and President, Greg Knox – past Chairman for the Dayton Region Manufacturers Association, current board member of the Tristate Tooling and Manufacturing Association and committee member for the Association for Manufacturing Technology – was recently selected by the Vice President of the United States to attend a business roundtable in Cincinnati, Ohio. The roundtable provided valuable feedback about corporate healthcare issues and challenges from a small business perspective to both, Vice President Pence and Tom Price, Secretary of Health and Human Services. 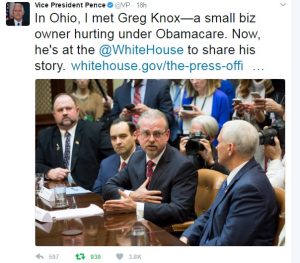 During the meeting, Mr. Knox spoke candidly about his opinion on the “broken” healthcare system, before changing the topic to manufacturing. Vice President Pence, the former Governor of Indiana and a strong proponent for manufacturing and the “Right to Work” Law in that state, welcomed the topic with obvious excitement. Knox praised the Vice President and President Trump for giving manufacturing more attention and genuine hope than the past 4 administrations combined, before discussing several, key issues. More specifically, Mr. Knox made the point that, “the erosion of our manufacturing base [in the U.S.] equates directly to the erosion of our National Security.” At the conclusion of the meeting, Vice President Pence offered complimentary words, and later that night, the Deputy Assistant sent a glowing email to Mr. Knox for his small business insight and keen manufacturing leadership.

Several days after the business roundtable, the White House phoned Mr. Knox, and it was communicated that Vice President Pence told President Trump about the insightful meeting that had taken place in Ohio. Furthermore, it was arranged that President Trump would fly the 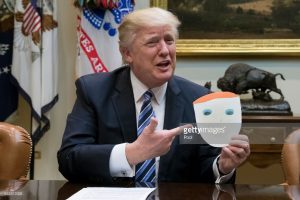 Knox Machinery owner to Washington, DC in 2 days to share his personal story in the West Wing of the White House. In preparation, Greg Knox organized a mission to do three things: 1) share Midwestern values and conservative views in regards to the relationship between the government and healthcare, 2) “talk a little manufacturing” with the President of the United States of America and how the erosion of U.S. manufacturing base equates to the loss of jobs, a weak middle class, and threatened National Security, and 3) deliver a card, from his 11 year old daughter, Siobhan, to the hands of the President.

When the meeting took place on Monday, March 13, 2017, President Trump listened to Mr. Knox share his thoughts on the failed healthcare system and its impact on small business owners. Knox stressed the Government should not be in the “healthcare business” and free market solutions should be made available. Furthermore, Knox expressed that America needed to get back to core principles, such as a strong work ethic and Entrepreneurialism. Mr. Trump acknowledged these statements, and told the group in attendance that over time, he would work to lower costs, expand choice, and ensure access for everyone in regards to the healthcare marketplace.

each encounter, Mr. Knox engaged in “offline” conversation about other manufacturing challenges, including: unfair competition, underdeveloped workforce, over regulation, and increased taxation. And, while Knox still feels strongly that there is too much Government intervention with the newly proposed healthcare plan, he knows President Trump is both a deal maker and a realist that is looking to put together something that can be passed without gridlock. And, interestingly enough, during his meeting with President Trump, Greg Knox was able to personally present and read his daughter’s note. Which, in return, the President autographed for Mr. Knox to take back home to Ohio.

The complete meeting with President Trump can be viewed here. (Mr. Knox begins at minute 49): https://www.youtube.com/watch?v=0emyHtzjjYA

A post-meeting interview with Fox News can be viewed here:

Knox Machinery is a family-owned company that has been in business for more than 20 years. The company offers a “360° solution” to fulfill CNC machining needs for customers in Ohio and Kentucky. With a focus on customer-centered sales and service, Knox Machinery proudly reflects family values and integrity. Over time, Knox Machinery has become a key player in the manufacturing industry and is committed to the future of manufacturing in America. More information can be accessed at https://knoxmachinery.com or by calling 877.566.9262