Knox Machinery was packed for the annual St. Patrick’s Day open house (which arrived 2 days early this year, since the actual feast day was on Sunday, the 17th)

The day began early for Jerry and Greg, with their traditional 6a.m Irish Coffee to gets things off to a proper start

After the green donuts and coffee were pretty well polished off an engaging multi-axis turning class began with Scott Fible from Clippard Instrument Labs in Cincinnati. Scott demonstrated a part on the 7 axis Ganesh Cyclone 32CS on Knox’s showroom floor which used to take several handlings, and is now processed complete in one operation on one of Clippard’s 5 Ganesh 7 axis lathes. Scott went on to explain how the 7 axis Ganesh lathes run 24/7 unmanned and have totally changed the way that Clippard produces their components. 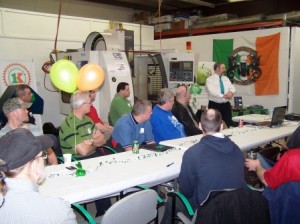 The lunch crowd came flooding in at noon for what has become an area tradition – “great corned beef and homebrew, and lousy guitar playing and singing” by the chief leprechaun himself.

Iscar hosted an afternoon session which featured advanced heavy duty milling cutters being put to the test on a geared head 50 taper Hwa Cheon CNC VMC (which is still available – at a BLOWOUT price, by the way!) 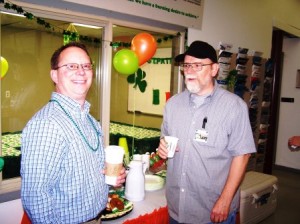 Mark your calendars now for the AMTS show Oct. 23rd and 24th at the Airport Convention Center, as well as Knox’s annual Christmas open house Dec. 11th and 12th! 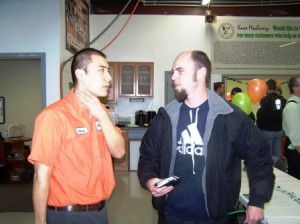